RICHARD CLARK ELLIS
( I must say that Dad did not always wear a beard.  This was grown for a contest he entered)

Memories that I have of my Dad:  Dick as he was called by most of the adults who knew him, was 5'7" tall. He had dark brown hair and hazel eyes.  He was a soft spoken man and slow to anger.  He loved hillbilly music or mountain music as it was sometimes called.  His musical ability came from what he was able to teach himself.  He could play the piano, mouth harp (harmonica) and "jaws" harp.  These he played by "ear".  I sometimes think that he knew the words to all the old songs and the new ones as well.  I remember his favorite hymn as being Rock of Ages.  After we got a radio he enjoyed listening to broadcasts of "Fibber Magee and Mollie", "The Bell Telephone Hour", and the "Grand Ole Opry".  When these programs came on, the kids were instructed to "sit down and shut up or leave the room."  He also told us funny Mother Goose rhymes such as Mary had a little lamb, her father shot him dead, now Mary takes that lamb to school, between 2 slabs of bread or Mary had a little lamb, his foot was black as soot, and everywhere that Mary went, he put his sooty foot and Old Mother Hubbard went to the cupboard to get her daughter a dress but when she got there the cupboard was bare and so was her daughter---I guess.
Dad had many occupations during his life time including farming, road construction and as a laborer for the WPA.  His road construction started with building roads and railroads using horse drawn equipment and progressed to the hugh road machines that one sees today.  During the Depression years, Dad would find work where ever he could.  I recall hearing that he was picking potatoes in Scottsbluff, NE.  and other times he would be helping in the hay fields around Lexington, NE.  He always tried his best to provide for his family.  Looking back I can realize how difficult it was for him and Mom during the Depression days but, as a kid living through it, it didn't seem so bad.  I always had food and clothes and all the other kids had the same so I didn't know we were poor.  I know that for me it seemed that he was not around much but whenever we were quarteened with some disease or another; he was always there to help out. 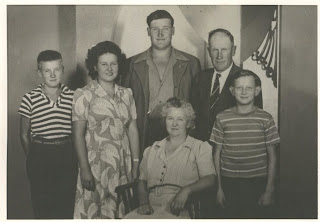 Posted by Dick Ellis at 6:28 PM No comments: 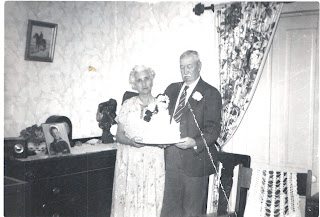 Lucy B. as she was called by the adults who knew her, was about 5'5" tall, slightly built but quite muscular.  She was rather dark complexioned and when she was younger, had dark brown hair that had turned gray by the time of my earliest memory.  Her eyes were hazel and her voice was rather high pitched.  She had deep scars on her right hand (as I remember) that were caused from glass cuts she received when her house caught fire and she broke a window to get something out of the burning house.  Grandma Adkins was a spry little lady even into her later years. My Dad used to say, “Lucy was always busy and she went about things "like she was killing snakes."  There is one story I remember hearing about her--this happened one time when she wanted Granddad Adkins to come home from a poker game he was in at a railroad line shack.  When he did not come home, grandma took a wet gunny sack and stuffed it in the chimney of the shack and "smoked" him and his cronies out.  Granddad came home.
When I think about Grandma Adkins, I marvel at the things she saw and the changes that occurred during her lifetime.  Our 21st President, Chester A. Arthur was in office when she was born and Jimmy Carter was President when she died.  Nineteen different men would be sworn into this office (Cleveland twice) during her lifetime.  She witnessed everything from foot travel to lumber wagon, covered wagon, stage coach, paddle wheeler on the Mississippi River, car, train and airplane.  She prepared meals on stoves heated with cow chips, corn cobs, wood, coal, kerosene, gas and electricity.  The development of sulfa, penicillin and flu vaccines were discovered during her life time.  Her houses were lit with candles, kerosene lamps, gas lamps and electric lights. Lucy endured two world wars and then the Korean and Vietnam situations.  Music came to her by personal presentation, radio and television.  She once told me about going to a World Fair in Chicago, IL.  At that fair her father would send her and her sister Eva to the educational exhibits while he attended an "International Geographic Presentation" entitled "Little Egypt” She was a grown woman before she knew the truth about Little Egypt.  She had lived in a sod house, then a wood house.  She lived through fire, flood, feast and famine; the depression years were extremely difficult for her and Granddad Adkins.  She witnessed the explosion of the Atomic Bomb and the landing of a man on the moon, both of these events via Television.  Granted there were others who experienced the same things -- but this Lady was my Grandmother.

Grandma and Grandpa Adkins were married April 29, 1903 in Beatrice, Nebraska.  To this marriage seven children were born but only three lived to adulthood.   Lucy was christened Methodist and is buried in the Trenton Cemetery.

Posted by Dick Ellis at 5:44 PM No comments: 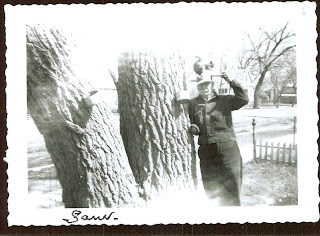 
The picture above shows my Grandad Adkins and his pet squirrel.  It was probably taken when he was in his late 80’s or early 90’s.


An interesting fact, at least to me, was that Grandad’s biological father was killed while taking a team of horses across a flooded stream.  This was around Chariton Iowa.  His Mother then married her husband’s brother.  Both brothers had served with the Union Army during the Civil War.  Thus he is the only person I know who had two fathers who both served during the Civil War.


Granddad Adkins lost his right hand in a hunting accident when he was a young man.  He was quite adept using only his left hand.  He could harness horses and drive a four horse team using what was always termed his "stub arm."  In addition to farming he was a County Commissioner-Hitchcock Co.  My dad told me about watching "Sam", as he was known by most adults, play pool with a special sleeve made to fit over the stub.  It had a ring mounted in the sleeve to hold the pool cue.  He was a good pool player.  I remember watching Granddad wrestle with brother Jim, he would use that stub quite effectively for a choke hold and he could punch with it as well.  He was a proud man and carried himself with dignity.  He was five feet ten or eleven inches tall, had grayish eyes and always had white hair and a mustache to match.  His wedding pictures do show him as having dark hair.  It was from his teaching that my brothers and I learned to use fire arms.  He taught us gun safety, proper use of weapons, and the principles of hunting.  We learned to use a rifle, shot gun and hand guns.  I remember that Granddad almost always carried a loaded hand gun with him and I asked him about this once.  He said, "during my lifetime I have known many men who I would not like to meet unarmed."  He would tell many stories that I still do not know if they were true or not since he was an interesting "story teller."  Such as the one he told about helping his half-brother "Doc" vaccinate hogs for farmers around the countryside where they were not well known.  Doc, a name he apparently assigned himself, would manufacture his own vaccine to treat hogs for erysipelas.  Granddad said, "many times he was glad that his horse was faster than those of the farmers when they discovered they 'had been had'."


Samuel James Adkins was born Oct 18, 1866 at Newbern, IA.  He came by covered wagon to Nebraska where they settled on a homestead 10 miles north and east of Alma, NE., on the day he was 12 years old, Oct 18, 1878.  He lived his early life around Alma and Oxford, NE.  He was married to Lucy B. Weekly,  April 29, 1903.  He passed away at his home in Trenton on May 9, 1959 at 3:30 AM at the age of 92 years, 6 months and 19 days.  He leaves to mourn his passing, his wife, Lucy and three daughters, Mrs. Doris Ellis, Mrs. Beulah Seybold and Mrs. Mildred Frick, all of Trenton.  A son Charles, preceded him in death in Feb 1924.  He leaves 11 grandchildren and 13 great grandchildren; one brother, Ora B. Adkins of Holdredge, NE.; several nephews and nieces and a host of friends.  The family spent the first years of married life in Oxford, NE. where he served 8 years as City Marshall.  He resigned from this work and bought a farm 4 miles south of Edison, NE. where they lived four years. They wanted to go further west and moved to Trenton in March 1919 and bought the Owen Murphy farm 5 miles east of Trenton.  During this time he served as County Commissioner 12 years.  He retired from farming in 1947 and moved to Trenton.  He gave his life to God and was baptized in Feb 1955 and continued in his faith until the last.

Posted by Dick Ellis at 6:17 PM No comments:

Dick Ellis
Alliance, Nebraska, United States
Born in Culbertson, Nebraska December 12. Attended Kearney State Teachers College 1948 to 1952. Later attended Iowa State University to obtain a certificate in Physical Therapy. I worked as a Therapist for 51 years and retired in 2009. I have a new interest in Family Genealogy and started this Blog to share with family and friends. I am also researching the families of: ELLIS, ADKINS, ASHLEY, WEEKLEY